Simon Leigh-Jones: 50 not out. Part one This is a momentous year in English’s history as it marks the 50th anniversary that Simon Leigh-Jones, English’s owner, started working at the restaurant. From cleaning the walk-in-fridge to helping in the kitchen, restaurant and office, Simon has certainly earned his stripes in the restaurant over the years!

We sat down with Simon and asked him a few questions about his – and the restaurant’s – history, from its origins, to ghosts in the toilets, to being frequented by famous celebrities and everything in-between. What comes next is both fascinating and enlightening – and fairly lengthy! – so we’ve split this into two blogs for your enjoyment as the content was far too good to edit…

English’s: contractors to the admiralty!

Hello Simon! Tell us a little about the history of English’s as you know it to start with.

“First mention I can find (everything including dates are unverified) is no. 30 (Oyster bar building) used as a fishmongers in 1850 until 1876 and then used as an oyster store until 1880 when the Brazier family opened their oyster bar. The Sussex coast was the centre of the enormous oyster trade during the mid to late 1800’s. Brighton had several oyster bars throughout the town centre but the whole industry had vanished by 1905 due to pollution and over fishing!

Mr A W English managed the oyster bar from 1893 and took the business over in 1910, when it becomes English’s. He acquires No. 31 next door in 1920. A W English died in the 1930’s and his sons took over. Clifford Leigh-Jones, my father, then bought the business around 1945. In the mid 1950’s Cliff L-J acquired No. 29 East Street, the four story 18th century house and café adjacent to Nos. 30 and 31. A local artist was commissioned to paint Murals on the walls of the downstairs restaurant in the style of Toulouse-Lautrec, which are still there today! The murals are painted on metal and curve around part of the wall.

The business flourished during the fifties and sixties before Cliff L-J becomes ill and died in May 1972. His wife Patricia L-J was then thrust into the business without any prior experience of the hospitality industry. 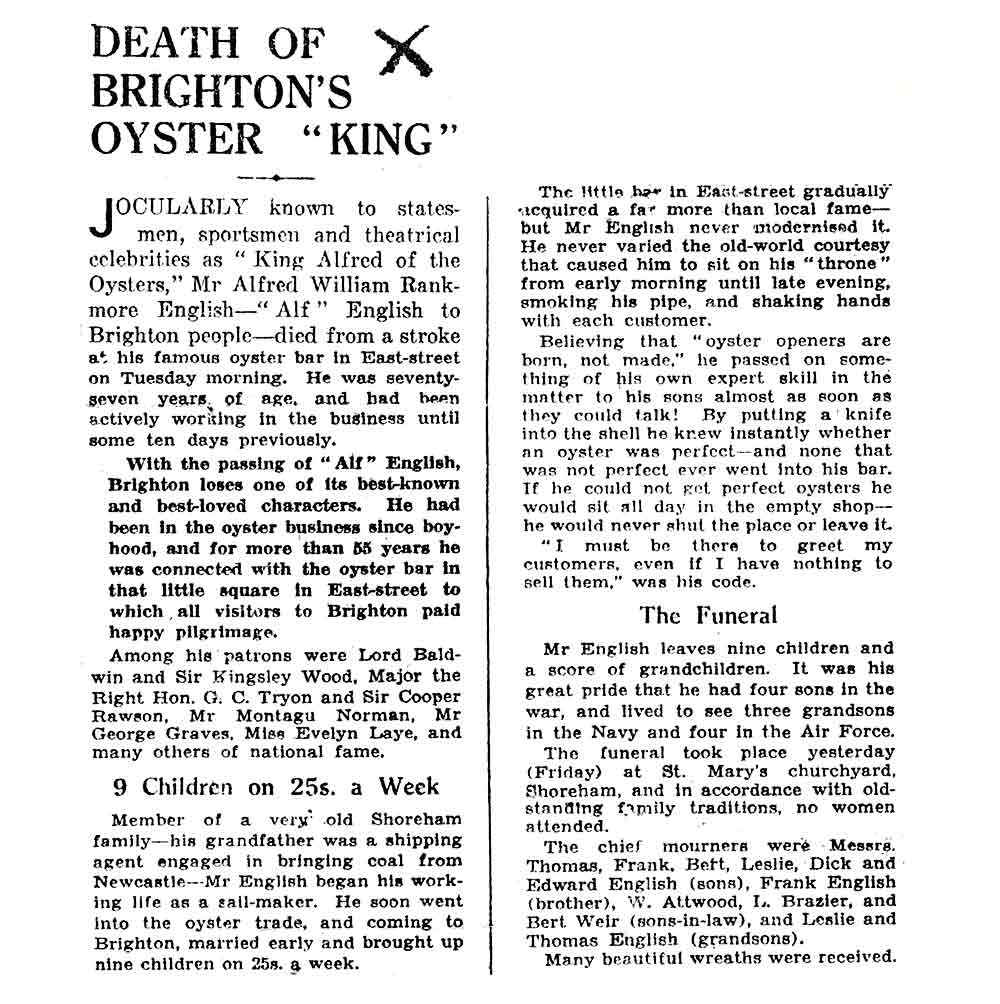 The death of Alf English as reported in a local paper.

Tell us about what you were doing before you started English’s and your introduction to working there?
I first worked at English’s shortly after Dad died in May 1972. I was still at school but I was drafted in to clean our large walk-in fridge in the kitchen that had been left in a bit of a state – as was the whole business! I joined full time in 1976 after leaving school and attending Brighton Technical College (Now City College) to gain an OND in Hotel & Catering Operations, where I also met my future wife Dionne! My elder sister Sally joined in too around 1979. I was multi-purpose in those days, working in the kitchens/ restaurant/ office and generally helping out where needed.

One of my main concerns was the profitability of the business which was rather delicate, so to speak. in the late 1970’s/early 1980’s. I reckoned we could save a lot of money on purchasing if I went to the local wholesale market in Circus Street (now completely redeveloped) and so I purchased a little Fiat Fiorino van, got up early and went and bought the day’s fresh supplies every morning – saving an absolute fortune in purchase costs. This is where we began our long relationship with Brighton and Newhaven Fish Sales, owned by Peter Leach. We’ve built up a close relationship with B & N over these 40 years and although Peter has retired from the business Kier Foster looks after English’s (and several famous restaurants too) working closely with our head Chef Yuri Magni. You may know B & N as Fish now located at the Eastern end of Shoreham Harbour close to Hove Lagoon. 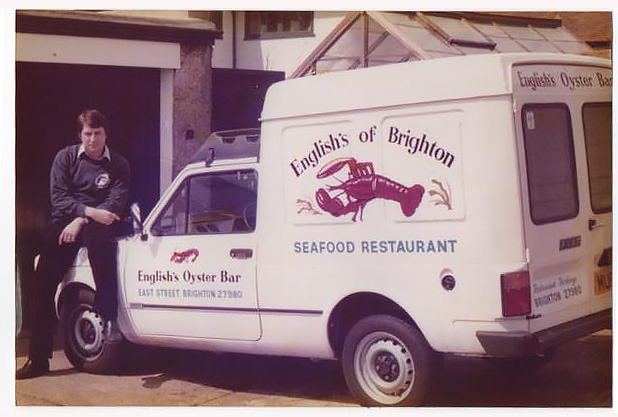 How did you look to develop the business?

We looked at various ways of developing the business and the ground floor of No. 31 had always been a problem. When it was part of the restaurant customers felt cutoff and didn’t want to dine there. It was then used as a cocktail bar for the restaurant but mainly turned itself into a “staff room”! Looking for a way to better utilize the space, we opened a fishmongers on the ground floor in 1986. I had thought this would have been a good fit for our restaurant next door with both supporting each other. I soon found out retail fish and restaurant fish are two different species but none the less English’s Fishmongers carried on successfully for a couple of years until one of the central Brighton Off-Licenses closed, allowing a better opportunity.

In those days liquor off sales were tightly controlled and it was very hard to get a Licence to sell alcohol “off the premises”. We applied for a licence and were successful and our Off-Licence/Wine Shop opened with the bang of a Champagne bottle being opened by way of a sabre “slicing” the cork off – more dramatic than it sounds! I seem to recall that for reasons I cannot remember had to call the shop English’s Off Licence as opposed to English’s Wine Shop as we wanted but suspect someone somewhere had messed up – probably me! The walls were lined with wine racks and being an independent we carried many lines normally only available in restaurants and hotels. We listed over 100 wines from around the world and many beers, waters and minerals as well as a large selection of miniature spirits and liqueurs. 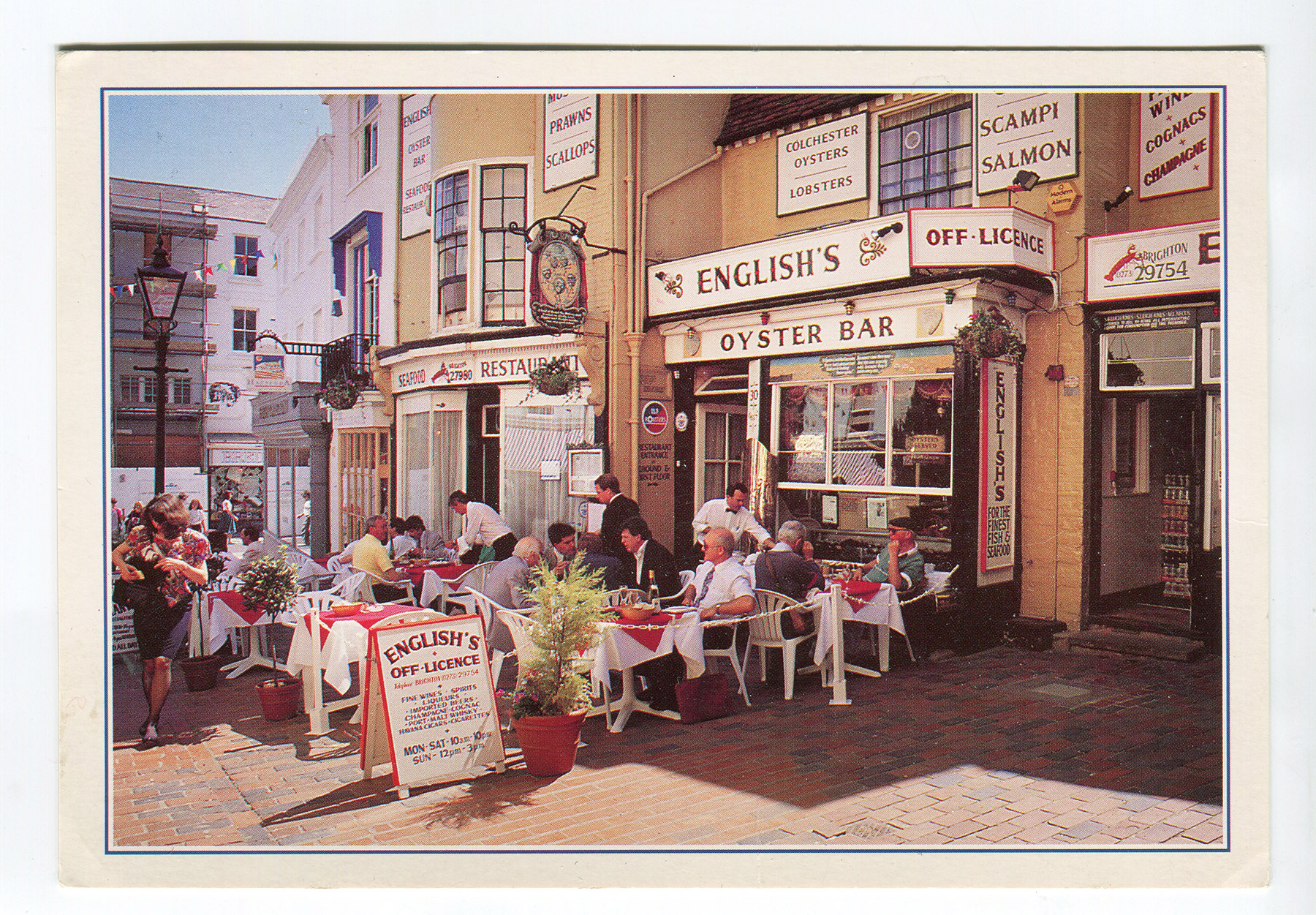 English’s when it used to have an off-licence.

So when did you take over the day to day running of English’s?

Alas my sister Sally became ill in 1990 and my mother took a step back from the business to care for her. So I took over the running of English’s ably assisted by Mark Necus our Restaurant Manager. Mark and I had run the front of house together since he joined the firm in 1985. I decided that to develop the business further we needed to split our roles. Mark would take over the day to day running of the restaurant and I would look after the “business bits”! This arrangement worked very well and throughout the 1990’s the business began to thrive. 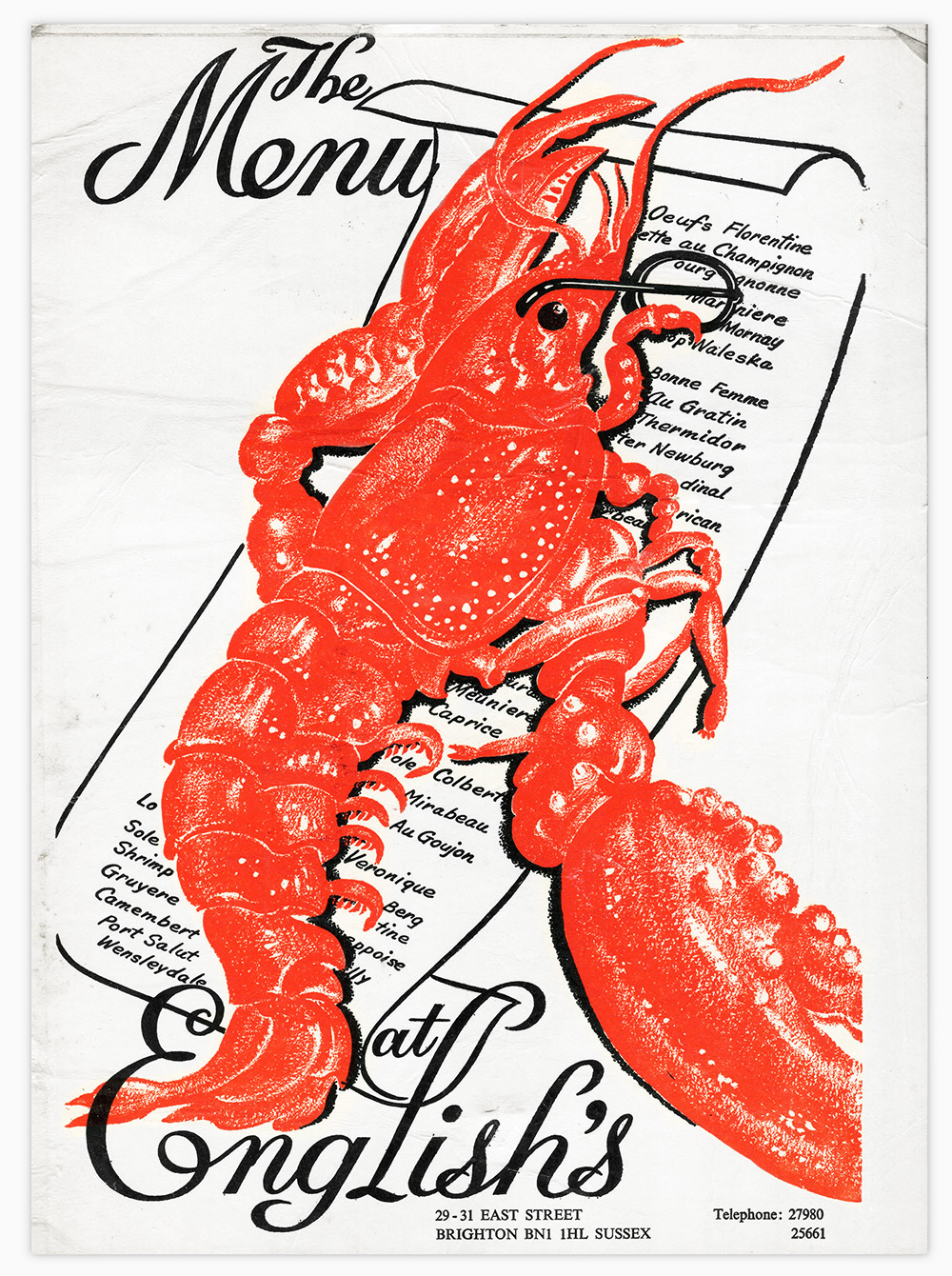 An old menu cover From the English’s archives

One of our greatest assets was the outside terrace, which is now taken for granted, but up to 1990 tables and chairs weren’t allowed on the public highway. As soon as we were allowed we applied and were granted a license to use most of the area outside the business. There were some teething problems, like not being allowed to serve alcohol outside but these were soon overcome and outside seating is now a way of life. We purchased an enormous Australian BBQ which we set up in the square (with the approval of the Council of course) and ran that for several years until the Environmental Health Department decided they didn’t like it anymore, even though they approved its operation in the first place, and that was the end of that!!

The next phase in the life of English’s was the purchase of the lease of No. 28 East Street in 1998, which was operating as a coffee shop. This was more of a defensive move to stop another operator moving in next door but we now were in the coffee business – before Starbucks and co landed in Brighton!”

Wow, we’re sure you’ll agree, some amazing insight and background about English’s there. Many thanks to Simon for part one of the ’50 not out’ blog and we can’t wait until part two which will be coming your way at the end of June.

Do you have your own memories of dining at English’s over the years? Please do share them with us and tag us on social media.
Until next time, happy dining!