You may have noticed when you’ve visited us recently that there’s been a changing of the guard in the restaurant. Out goes much loved and valued General Manager, Andries J. Pienaar, fondly known to staff and customers alike as ‘Andre’, and into his position comes English’s stalwart and Oysterman, Jonathan Speirs.

Whilst we’re sad to see Andre depart, we couldn’t be in safer hands with Jonny stepping into the breach. He’s been with English’s for several years now and knows the restaurant and operation like the back of his oyster shucking hands!

As a farewell and hello to both of these immensely talented and valued men, we’ve prepared a blog – in their own words – in their honour. 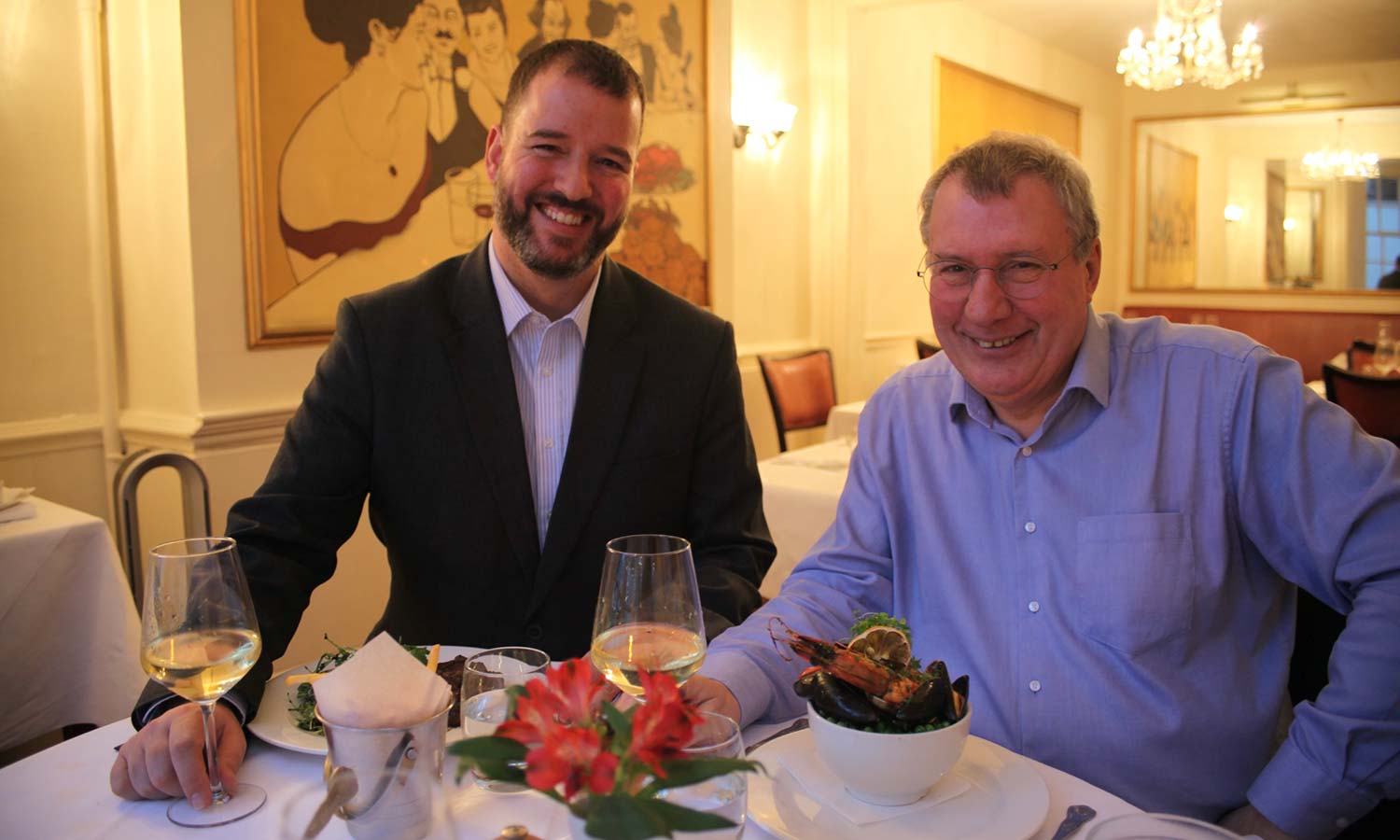 “Having studied opera in South Africa, I came to the UK in 1999 for a year out before, inevitably making it big on the stage. Alas – I started working as a commis chef and never looked back.

Having worked for about 7 years as a chef I made the transition to front of house management where I could more fully employ my natural ability as a performer whilst drawing on my invaluable knowledge gained from my years as a chef.

I worked at English’s for 11 blissful years, starting off as Restaurant Manager and working my way up to General Manager. Though, like with any job, it has it’s ups and downs, I can honestly say it is the job I’m proudest of so far and the position I was least willing to leave in the end.

With everything going on in the last few years, I have been feeling the heartstrings pulling me back home and the relentless barrage of bad news just made the comfort of family seem even more desirable. So it was always my intention to return to South Africa this year, however, a family situation required me to leave considerably earlier than intended, now that I’m here, I am happily working with my sister in her ice cream shop where I’m mastering the art of churning delicious ice creams and sorbets all with the backdrop of the wonderful west coast of South Africa.

I love being with my family and back in the old country, but I miss my restaurant, my team and my customers terribly though I have no doubt that the Wonderful Mr Speirs is the best person to step into the roll and I am so grateful that I could leave knowing that beautiful institution was in safe hands.”

Thank you, Andre! Now over to you, Jonny… 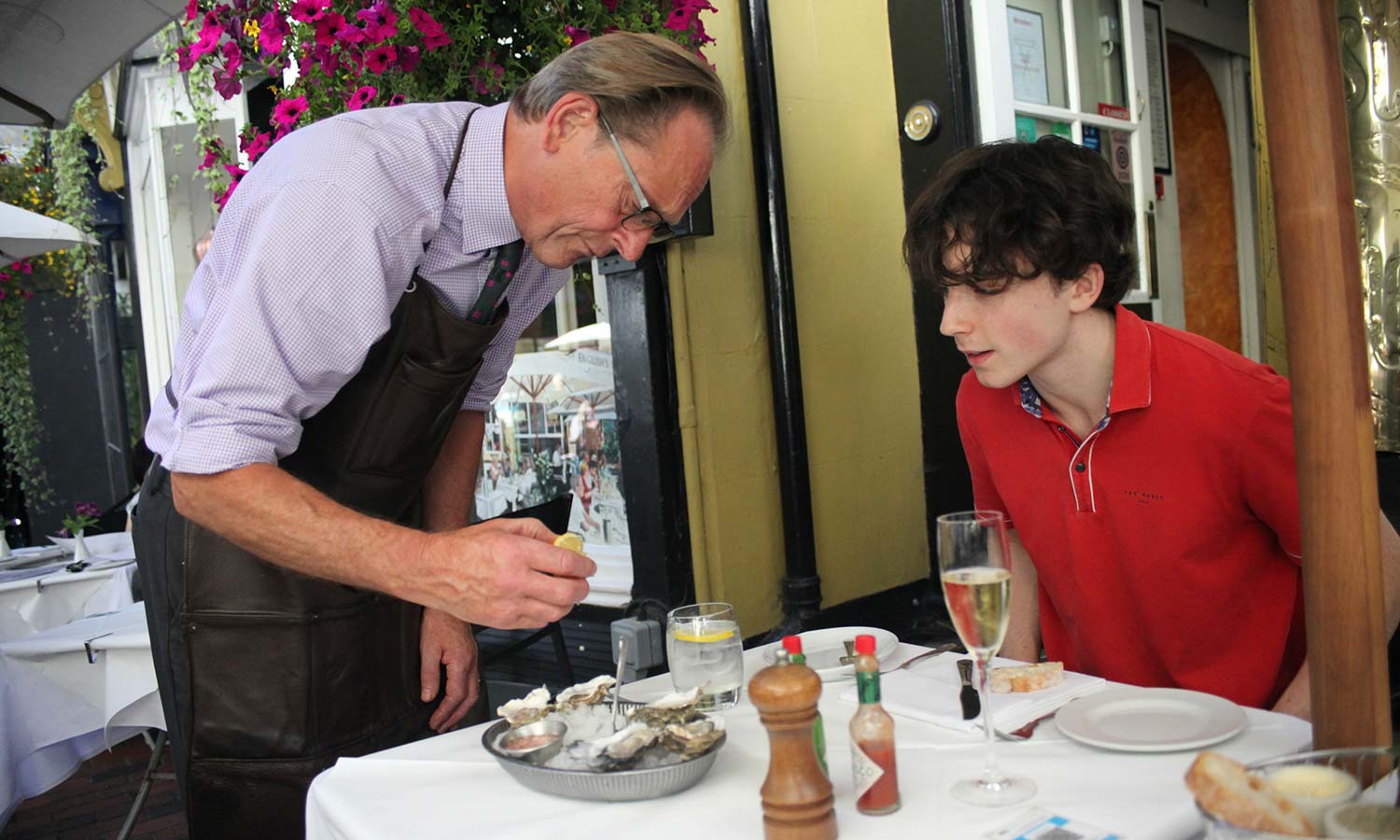 Jonny, The Oysterman, passing his oyster obsession onto a new generation

“In the late 70s having spent one year working in the jewellery business working for Celebrity Jeweller extraordinaire, Andrew Grima, I decided to change direction and enter the catering business. I went to work at Ronnie Scotts night club for one year and got the bug for Hospitality.

A new and exciting cocktail Bar opened in Covent Garden called Peppermint Park and I spent one year there and then moved on to the old Coq D’Or in Stratton Street, Mayfair, which had just been converted to a modern French Restaurant and through a friend of the family I was introduced and employed by, Peter Langan, at what was the new and now famous Langan’s Brasserie - I was trained from commis waiter to a section head waiter over two years.

A new restaurant in Primrose hill was then opened by a regular of Langan’s and I went to be head waiter there. After this I settled in to management and was involved in opening relatively big restaurants like The Dome in Oxford and setting up Wheelers and the three little rooms after a revamp, and the moved up to Wheelers Old Compton Street.

When this was sold off, I was hired as part of a team of caterers by the Millenium Dome project for the year leading up to its grand opening at the beginning of 2000 and then for its first month open to the public.

I then had the pleasure of meeting current English’s owner, Mr Leigh-Jones, and the general manager, Mark Necus, and I was hired to run their Curve Bar restaurant in the North Lanes. When Mark retired from catering I then took over at English’s. The rest, as they say, is history! Until now, as another chapter opens up in my role as General Manager.

I’d just like to put on record my appreciation of the job that Andre has done. He’s a talented, personable fellow, and I wish him all the best in his new role in South Africa. He’ll be sorely missed by staff and customers alike.”

Well, there you have it. Out with the old and in with the … old!

Thanks for all the hard work and the memories, Andre, best of luck in your new life.

We know that Jonny is going to be a more than capable replacement for Andre, and we wish him all the best in his new role.

As for us, we realise how lucky we are to have two such personable and talented men contributing to our success over the years.